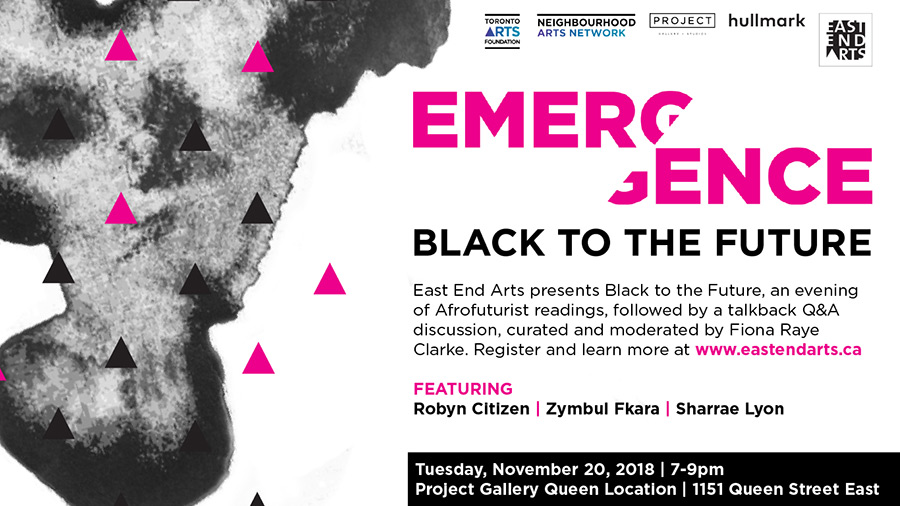 Black to the Future is an evening of Afrofuturist readings, featuring an engaging talkback Q&A discussion curated and moderated by Trinidadian-Canadian writer, playwright, filmmaker, and community-engaged artist Fiona Raye Clarke. The evening will begin with readings of Afrofuturist works written by Zymbul Fkara, Sharrae Lyon, and Robyn Citizen. Following the readings, audience members will have the opportunity to engage with each writer through a moderated talkback discussion, allowing for the exchange of ideas, feedback, and dialogue surrounding themes of Afrofuturism, Black futures, and more. The evening will conclude with an open reception where participants will have the opportunity to network, meet the writers, and participate in a drop-in, art-making station.

Black to the Future is presented by East End Arts, in partnership with Neighbourhood Arts Network as part of the 2018 Emergence Symposium.

Fiona Raye Clarke is a Trinidadian-Canadian writer, playwright, filmmaker and community-engaged artist. She has received support for her fiction and playwriting from the Ontario Arts Council. Her plays have appeared in various publications and on stage at the InspiraTO Festival and b current’s rock.paper.sistahz festival, and her writing published in Broken Pencil Magazine, alt.theatre, and Room Magazine’s blog. She is the winner of the 2017 CaribbeanTales CineFAM Short Film Challenge for her co-written screenplay “Intersecting” and was a 2018 Magee TV Diverse Screenwriters Award finalist.

Fiona is the editor of the community-engaged anthologies Basodee: An Anthology Dedicated to Black Youth (2012) and the upcoming Black Like We: Troubleshooting the Black Youth Experience, which was the winner of the ArtReach Youth Arts Pitch Contest.

She is an Amherst Writers & Artists Method certified facilitator and has facilitated creative writing workshops for the Toronto Public Library, Parkdale Project Read, the 519, and East End Arts. She is a 2018 Diaspora Dialogues Long Form Mentorship Program mentee for her short fiction collection and a Writer in Residence at Firefly Creative Writing.

Zymbul Fkara also known as R. Flex is a singer-songwriter and poet with a knack for sweet melodies and lines about back rolls. This past summer, they performed Pride Toronto both as a solo act and a backup singer in the group, Tush. They recently drafted a manuscript titled Forever Known As Ryan Anthony.  In it are three poems published in Occasus Literary Journal and The Regis.  When they’re not writing poems by daylight and winning love also by daylight,

they’re in the studio preparing the follow up record to their EP, “In & Out”. Check the Flex on Spotify, SoundCloud, and Apple Music and give a warm afrofuture welcome to Zymbul Fkara.

Sharrae Lyon is a futurist, filmmaker, multidisciplinary artist, writer, facilitator and public speaker currently based in Toronto/Tkaronto of Xamaycan (Jamaican) descent. She believes in the power of myth and story as a tool that can be utilized to project ourselves into alternative sustainable futures that can heal traumas of the past and present. Her writing has been published in The Peak Magazine, Canadian Dimensions, For Harriet and Muslimah Media Watch. She is the alumni of Blackhouse Fellowship Program, Black Women Film! and the DOC Institute and is gearing up for the screening of her short film, Delayed Echoes. . Additionally she has facilitated at the Detroit’s Allied Media conference, Summerworks Performance Festival, Paprika Festival, University of Toronto (OPIRG, Multifaith Centre), York University, McGill University (Black Congress for Writers and Artists) and Dalhousie University’s Black Canadian Studies Conference.

Robyn Citizen is a writer and media scholar who received her PhD in Cinema Studies from NYU in 2015. She was a lecturer in the Asian Studies and Theatre and Film departments at the University of British Columbia from 2011-2017, and recently was an International Programming Associate for the 2018 Toronto International Film Festival. Her primary research interests are how representations of race, ethnicity and national identity circulate in transnational cinemas and the horror/science-fiction genres. She has published in edited collections, online and print film journals and presented her research at numerous conferences.