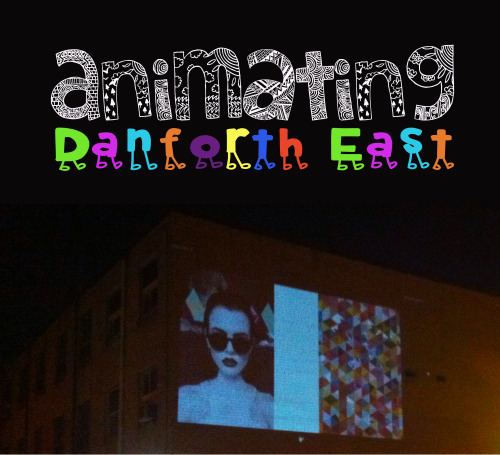 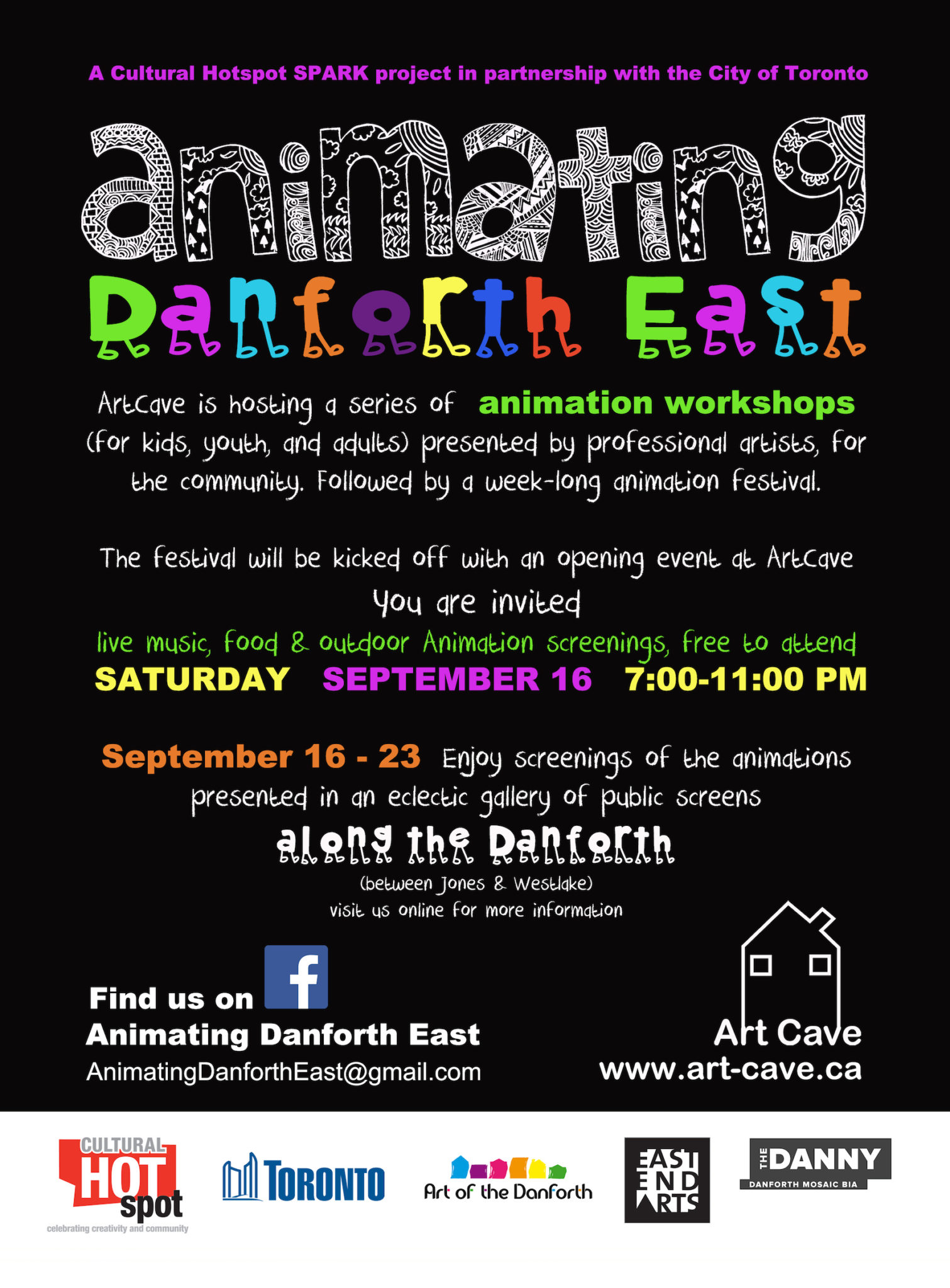 Free workshops May-September 2017
A series of free animation workshops for kids, youth and adults, held by emerging and established local artists and animators. Participation will be open to all community members, but will have a particular focus for kids and youth. Workshops are catered to minority groups. 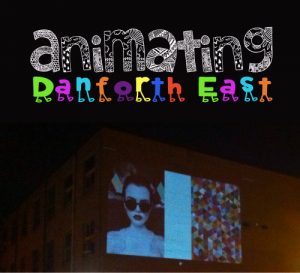 Festival September 16-23 2017
A week long animation festival involving display of all the animations created during the workshops, presented in an eclectic gallery of public screens in businesses along the Danforth (between Greenwood and Woodbine). Our festival guide and a map will take people for a journey along the Danforth to view the animations. The festival will be kicked off with an opening celebration, and outdoor projection at ArtCave on September 16, 2017 from 7-11PM.

Kids will create their own props and characters to create various collaborative stop motion animations. While using tools and techniques like clay, paper, video editing and drawing children will play with creative technologies and learn about the world of animation. Be part of the Animate Danforth East festival at Art Cave!

Workshop Presenter: Elfie Kalfakis – Elfie is a practicing digital artist and certified teacher. She has worked in schools across the GTA and southern Ontario teaching visual and digital media to elementary and secondary students. Prior to teaching she practiced professionally as a designer. She is currently inspired by, static and animated digital collages created from found vintage images, sacred geometries and surrealistic imagery. 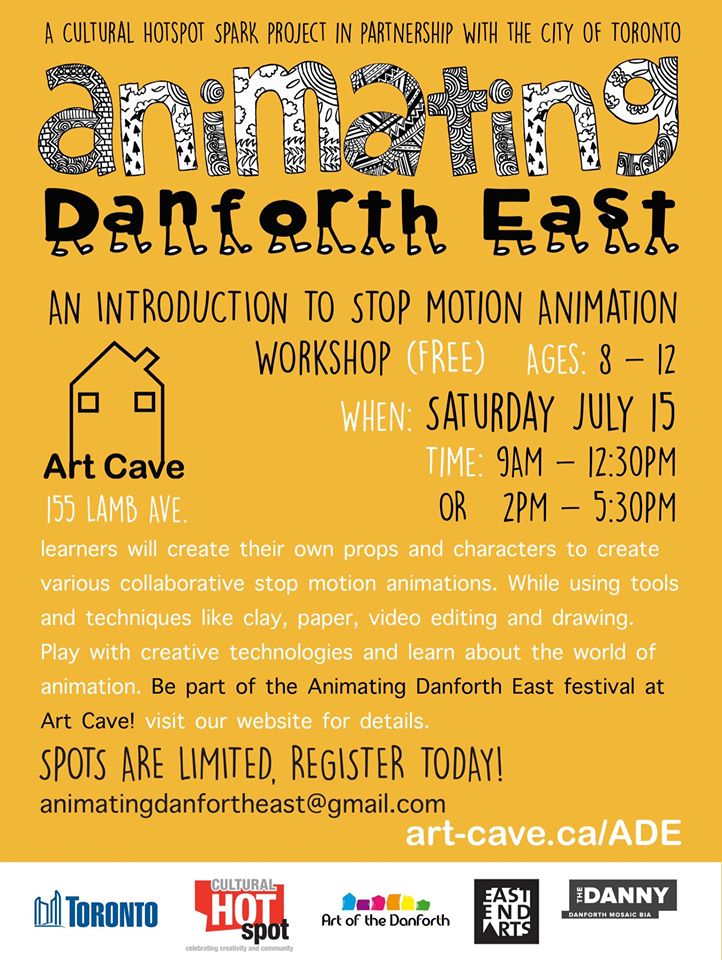 Learn one of the basic concepts in animation using replacements (a stop motion technique). After a short introduction to stop motion animation where you will be introduced to the different techniques used, the workshop will focus on one of those techniques and you will build a series of simple shaped plasticine characters and see how they come alive while filming them on a set. Be part of the Animate Danforth East festival at Art Cave.

Workshop presenter: Philip Marcus – Guest local established artist, Philip Marcus is a stop motion director/animator/designer. He has won advertising awards for his TV commercials, has been nominated for work done on children’s animation series and awarded at Cannes for his independent film work. He lives in the east end of Toronto. www.quackquack.ca 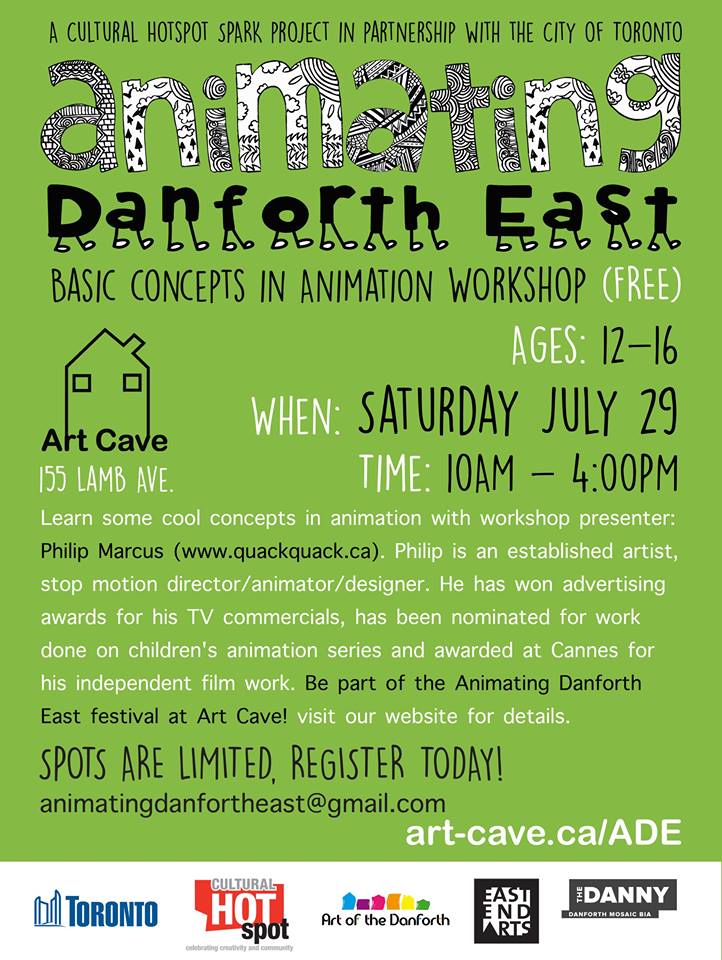 Calling for LGBTQ youth aged 12-18 to Animate Danforth East. Hands-on one-day workshop to animate your own story: Crush? First kiss? Slow dance? Pride? Show off your art chops, your diversity, and your sexuality. Be part of the Animate Danforth East festival at Art Cave.

Workshop presenter: Martha Newbigging – Guest local established artist, Martha has illustrated children’s books for publishers including Annick, Owl Books, and Kids Can Press. They have taught comics and animation workshops in a wide range of school and community settings across Ontario, including an LGBTQ youth support group in Belleville. Martha is an instructor at the School for Creative Arts & Animation at Seneca College, a graduate of the Ontario College of Art and Design, and has a Bachelor of Education from York University. They are currently drawing and writing autobiographical comics about queerness in their youth. www.marthanewbigging.com 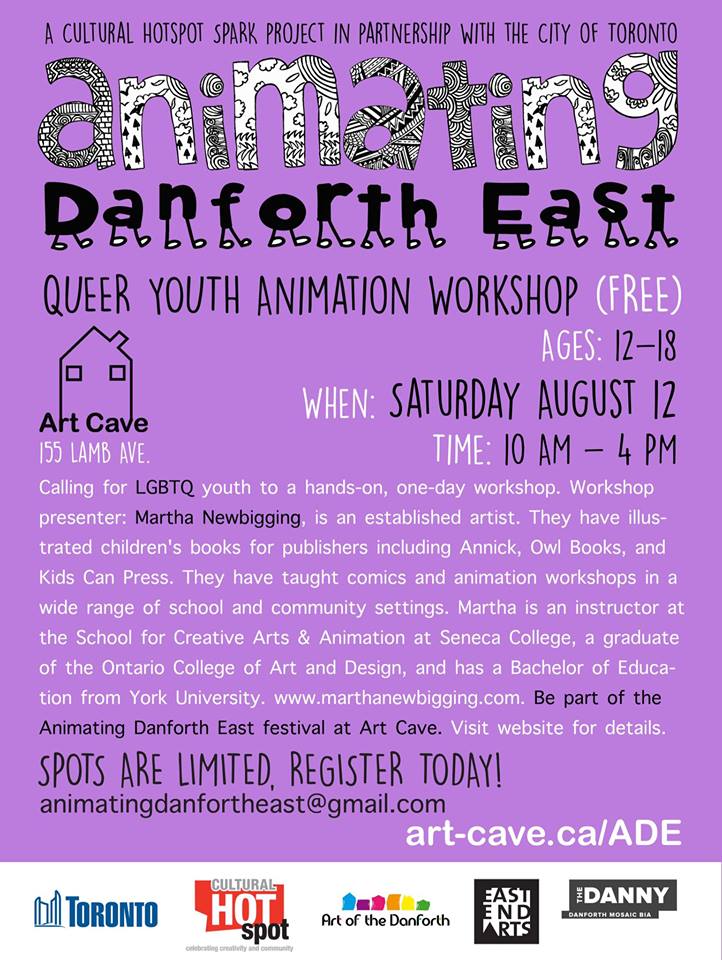 Learn about the wonderful world of animation through a variety of mediums. Hands on fun! Learn to use technologies to create a variety of short, stop motion animations. Be part of the Animate Danforth East festival at Art Cave!

Workshop Presenter: Naz Rahbar – Co-founder and director at ArtCave, since 2013. Naz is Fine Art graduate from OCAD University, and has a Bachelor of Education with a Fine Art focus from York University. Naz is a practicing multi-media artist and educator, with many years of experience at various schools and settings in Toronto and the GTA, as an artist, instructor and leader with children, youth and adults. The core of her practice is drawing which have taken shape as books, installations, prints, projections and most recently, animation. She has been teaching animation and other visual art classes to kids, youth and adults at ArtCave. Her work has been shown locally and internationally. www.nazrahbar.ca 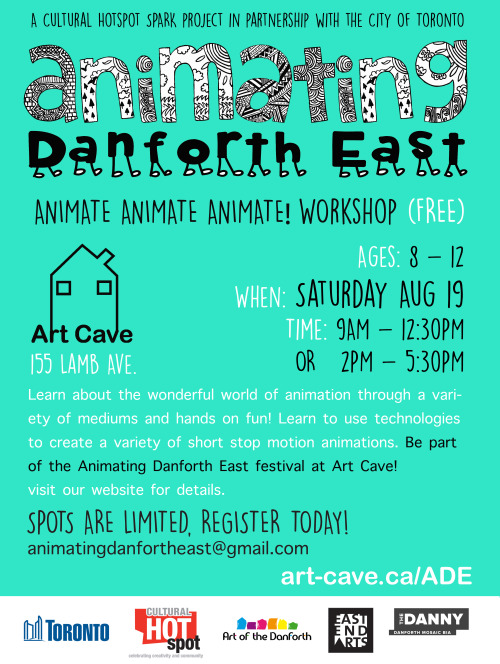 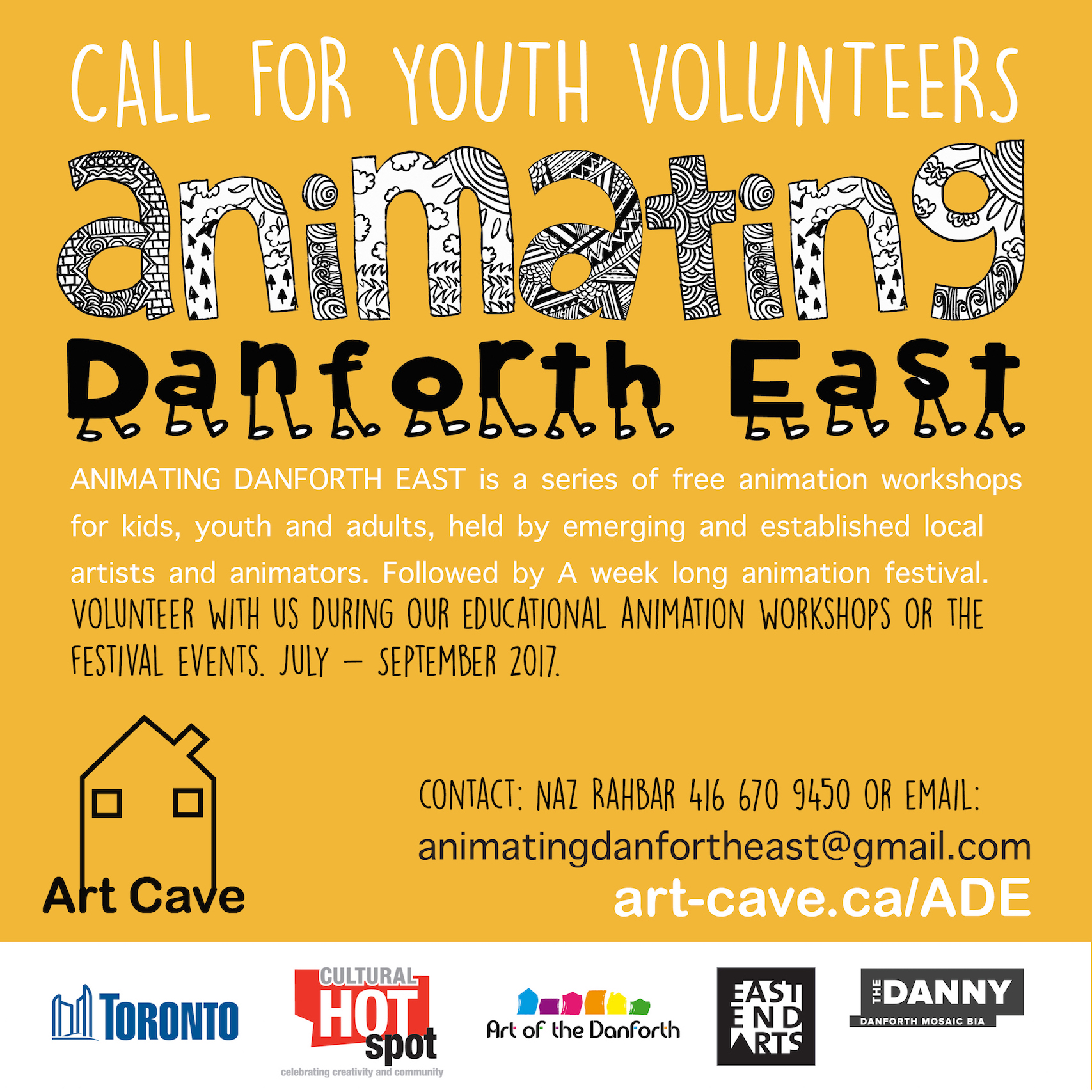 Animating Danforth East was awarded the Art of the Danforth Creative Legacy Grant from East Danforth Creative Collective. This award was presented to support a local artistic project that carries on the ideals of excellence in art with community building introduced by the multi-media arts festival Art of the Danforth. This project was also awarded through a program of seed funding and mentorships provided by the City of Toronto’s Cultural Hot Spot program, SPARK, which aims to boost artistic talents that highlight the local Hotspot, promote local organizations, and bring guest artists into the neighbourhood.