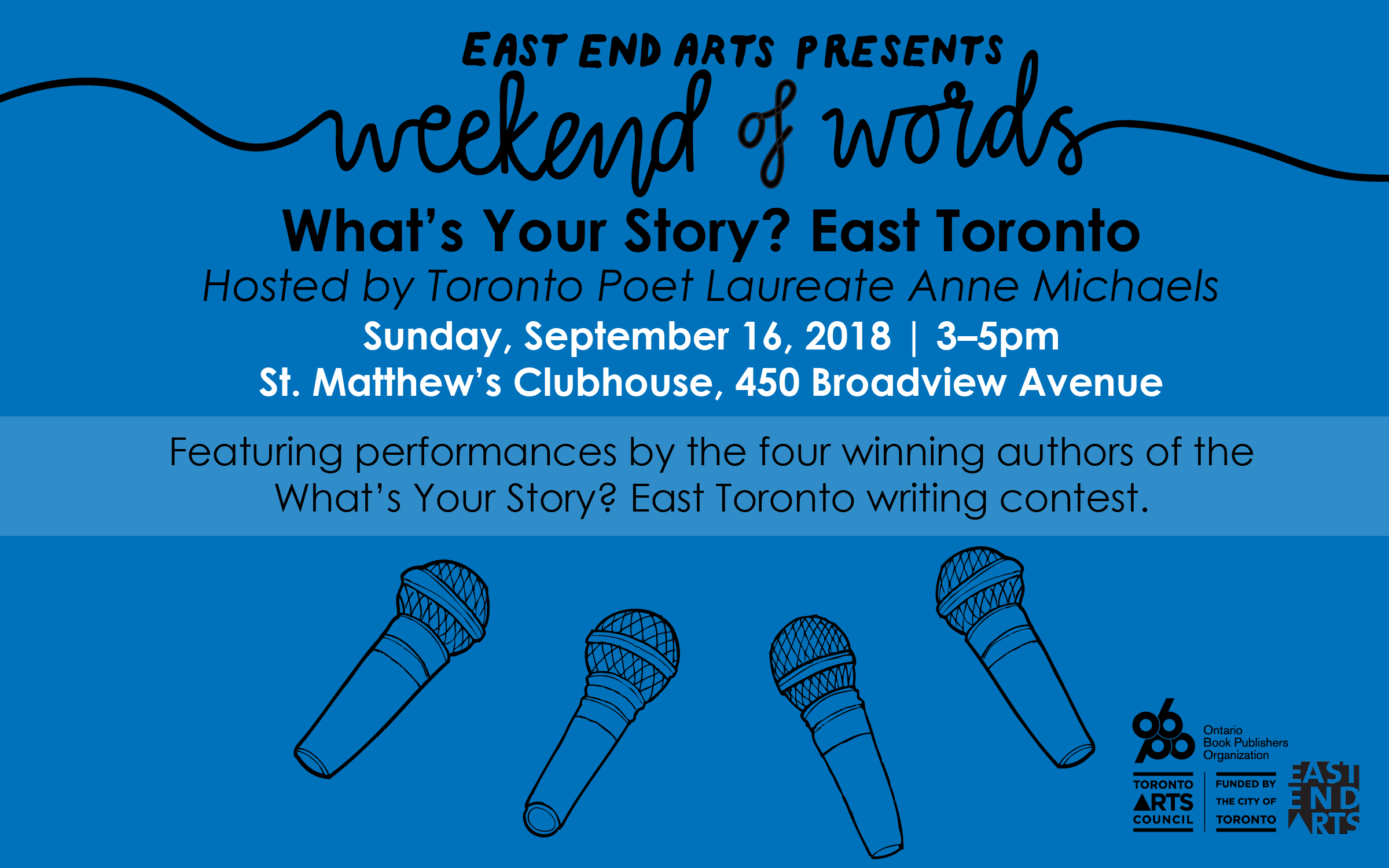 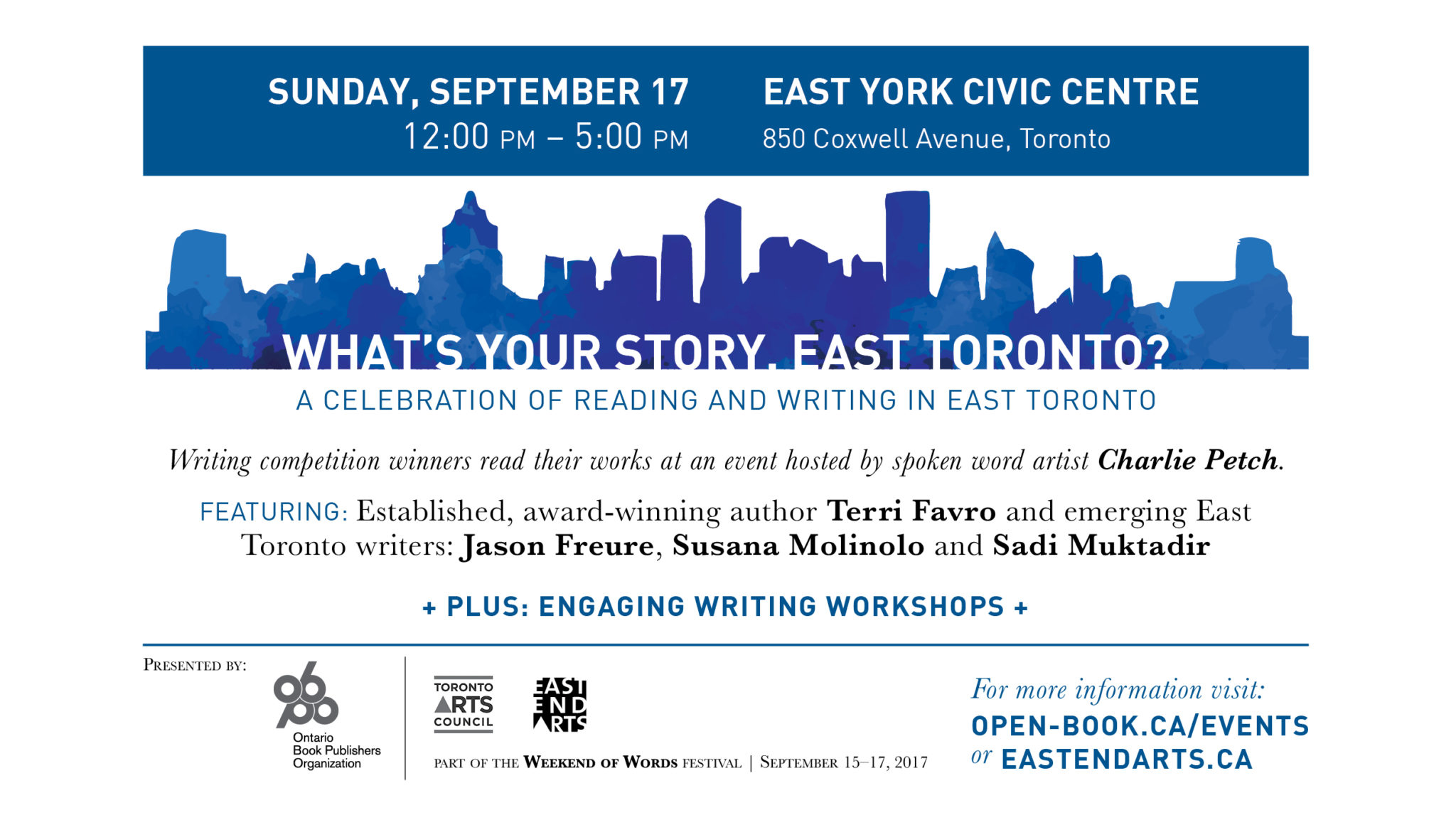 Join us as we gather to honour the stories and voices of East Toronto and celebrate the winning writers of the What’s Your Story, East Toronto? competition as they share their work.

What’s Your Story, East Toronto? presents performances by the four local writing contest winners. Hosted by Toronto’s Poet Laureate Anne Michaels, this event will feature the original works written by the winning authors inspired by the East Toronto area, while also celebrating the culmination of the three-year What’s Your Story initiative.

What’s Your Story? is a free celebration of reading and writing in East Toronto, and is presented by Ontario Book Publishers Organization (OBPO), Toronto Arts Council, and East End Arts.

What’s Your Story? is a series of literary events taking place in the inner suburbs of Toronto: East Toronto, Etobicoke, North York, and Scarborough. These reading and writing events will help to provide all Toronto residents with access to Toronto’s dynamic literary scene. A writing contest was held by the OBPO and four writers were selected from each neighbourhood. The OBPO has commissioned each one to write a piece about their neighbourhoods. These pieces have been published on Open Book and will be performed at the events.

What’s Your Story? East Toronto is presented as part of the Weekend of Words, a free 3-day celebration of language and literary arts from September 14-16 at St. Matthew’s Clubhouse. 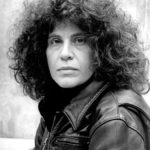 Anne Michaels is a novelist and poet. Her books are translated into more than forty-five languages and have won dozens of international awards, including the Orange Prize, the Guardian Fiction Prize, and the Lannan Award for Fiction. Among many other honours she has been shortlisted for the Giller Prize (twice), the Governor-General’s Award, the Griffin Poetry Prize, and longlisted for the IMPAC Award (twice). Her novel FUGITIVE PIECES was adapted as a feature film. She has two new books in 2018, INFINITE GRADATION, and RAILTRACKS (co-written with John Berger). She is Toronto’s Poet Laureate. 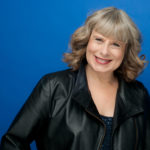 Lesley Krueger is a novelist, short story writer and screenwriter who lives in east-end Toronto. Her latest novel is Mad Richard, published in 2017 by ECW Press. In 2016, she was one of the winners in both the Prism International Short Fiction contest and the Bridport Prize in the UK. 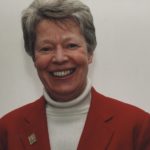 Elizabeth Gillan Muir has lived in Toronto East since 1994. Her son lives there, too, along with his three children. Elizabeth grew up in the Ottawa Valley, attended Queen’s, Harvard and McGill Universities, earning a PhD from McGill.  She has written several books, among them one on the history of Riverdale, Riverdale, East of the Don. She is presently the secretary of the Riverdale Historical Society. Now retired, she worked in education, both teaching and in administration. 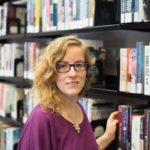 Emily Gillespie has lived in East York for three years. In addition to being a writer, she works in the non-profit field and is particularly interested in mental health activism. Gillespie has a Bachelor’s degree in Gender Equality and English and aMaster’s degree in Disability Studies. 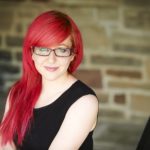 Nicole Saltz is a South African-born writer who resides in Toronto with her Cayman-born dog. She studied screenwriting at York University, where she won the Stanley Fefferman Prize for Creative Writing. Nicole’s essays have appeared in Chatelaine Magazine and Good Housekeeping, and her poetry has been published by (parenthetical) Magazine and on the Puritan’s blog.  Nicole is currently working on her first novel, Louise Tomorrow, as well as a collection of short stories.

Spots for this workshop are limited. Please click and RSVP on Eventbrite to reserve your space!

Be sure to check out the 2016 What’s Your Story? winners! You can read the winning texts from each neighbourhood: East York, Etobicoke, North York, and Scarborough.

Weekend of Words is a free, three-day celebration of language and literary arts in east Toronto from September 14-16 at St. Matthew’s Clubhouse, featuring literary performances, workshops, and more. 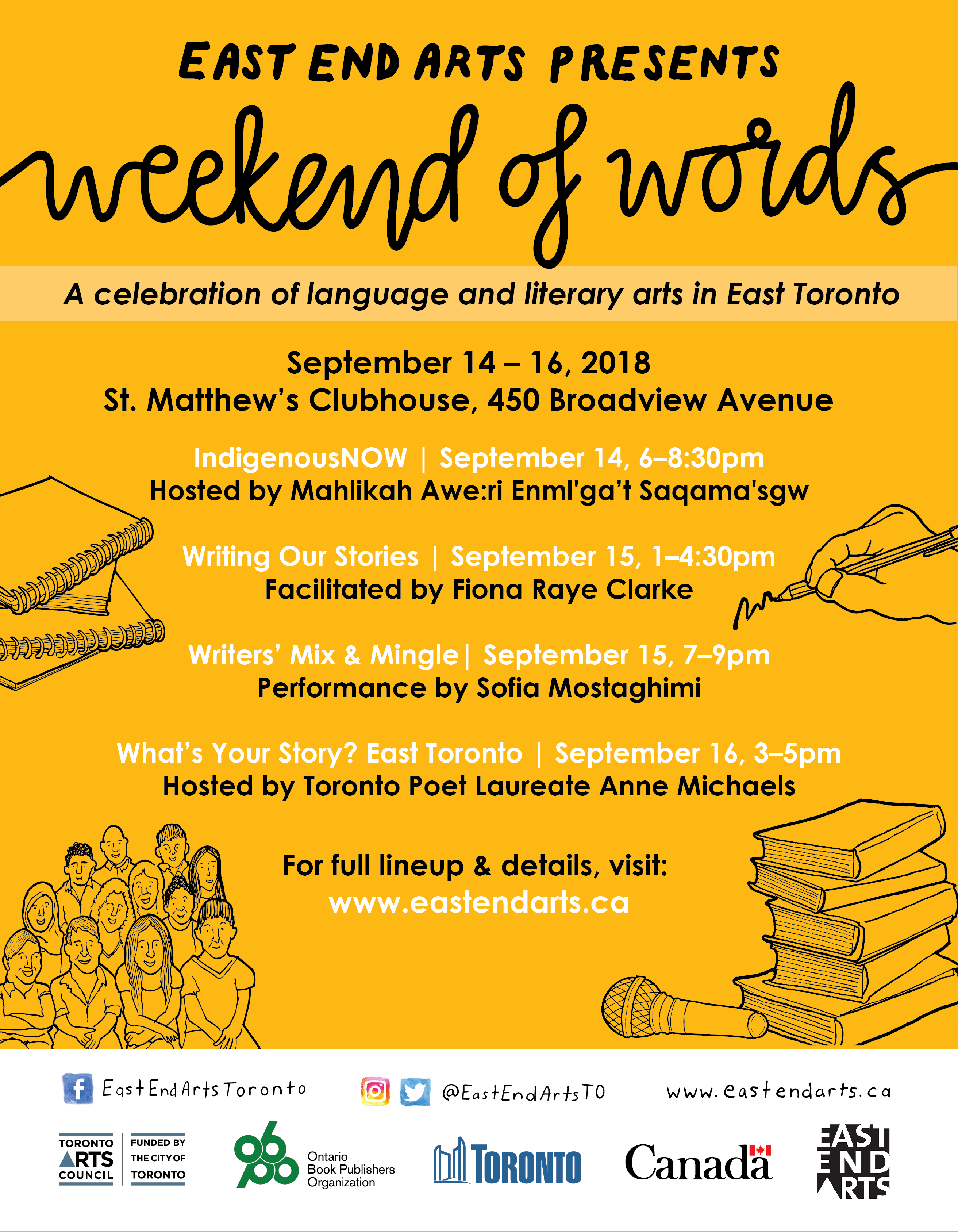 East End Arts strives to make our programming as accessible and inclusive as possible. If there are any accommodations that you require, please send an email to info@eastendarts.ca and we will do our best to meet your needs.