Michelangelo Pistoletto’s Venus of the Rags, initially created in 1967.

With our current programs, TAPESTRY and ArtMEETs, being so textile-focused we’ve had sustainability in textiles and fashion on our mind. This month we invited Norwin Anne, a Filipinx textile based artist, eco-culture communicator and (re)maker/designer, to write about these incredibly important subjects.

The fashion industry is known to be the second largest polluter in the world, from the production of clothing to the garments end of life. Over the last few years, I’ve become interested in understanding the secondhand clothing waste stream by researching and trying to figure out the best ways to manage “textile waste”. I learned that most of our discarded clothes actually ends up overseas -unfortunately, in places like Kantamanto Market in Ghana and the Atacama Desert in Chile (which not only threatens people in those communities, but also contributes to worsening climate change)- from the surplus donations collected for charity and through textile recycling programs. Only 10-20% of clothing that’s donated to thrift shops are actually resold in stores. So what happens to the 80-90%? 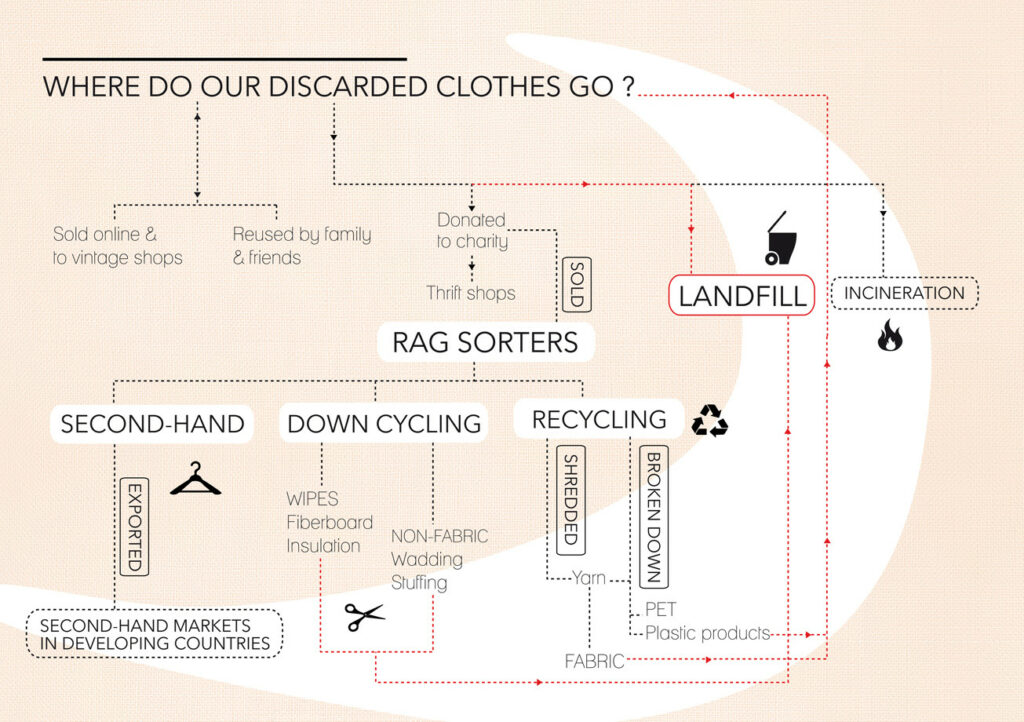 Based on the City of Toronto household waste audits, the average Toronto household throws out 37lb of clothing and other textiles each year! Globally, 80% of discarded clothing/textiles end up in landfills turning into toxic waste sites or are sent for incineration. They take over 200 years to fully degrade and as it decomposes, it emits methane gas which is a greenhouse gas 28 times more potent than carbon dioxide. Only about 20% is actually reused or recycled and from that, less than 1% is converted into new fibers to make new fabric for clothing. So these are some things to consider before discarding any of your clothes and to quote marine biologist, Sylvia Earle – “What are we thinking when we just throw things away? There is no ‘away’.” 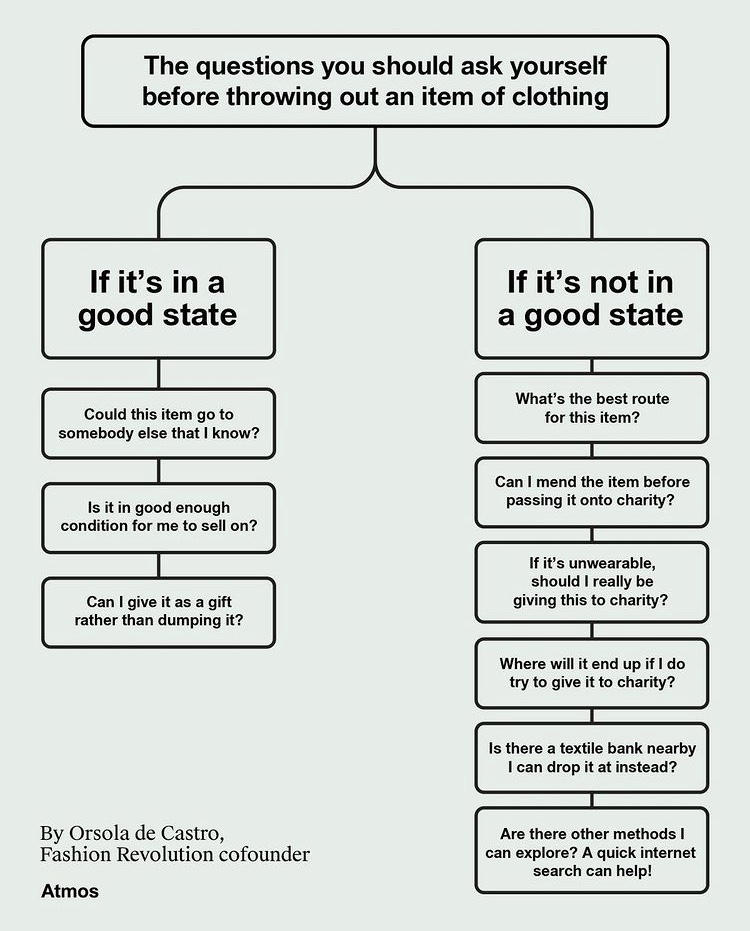 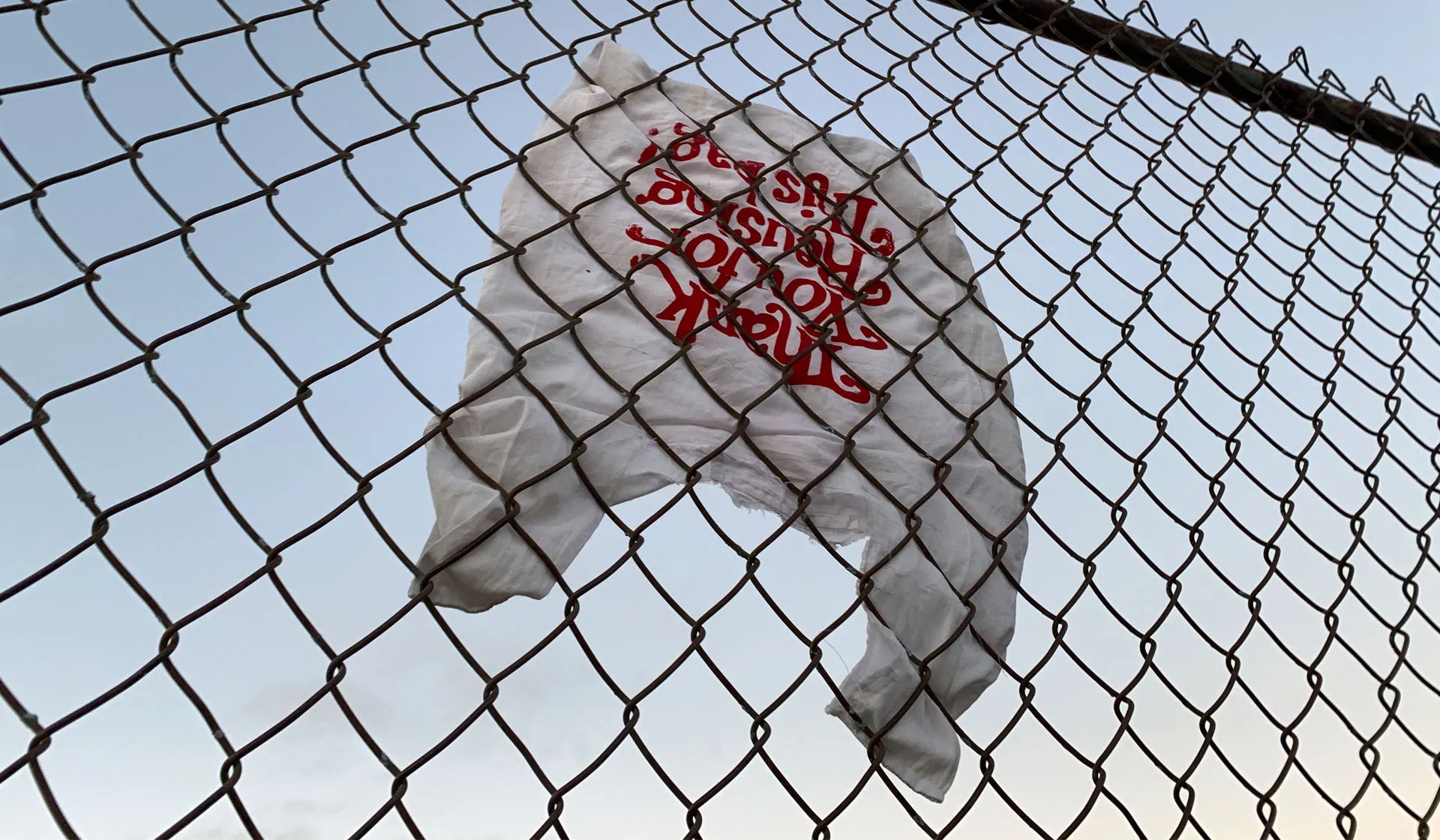 The crisis of convenience.

As seen in the photo above, the statement (“Thank You for Reusing This Bag”) reminds us to reuse bags and to reflect on our relationship with plastic – calling attention to the waste crisis, but it’s actually much more than just that. The bag also represents our shopping habits and the message is meant to emphasize reusing what we already have in general – to prompt a culture of repair and re-wear when it comes to our wardrobe, whether it’s a bag or a dress. The disposability of clothing is comparable to single-use plastics now, since consumerism promotes the desire for newer outfits and the acceleration of production results in an abundance of garments that end up in landfills. So the intention is to bridge the gap between plastics and clothing, to make us reflect on our relationship with both. But also the fact that most of our clothes are made from synthetic textiles which is derived from petroleum (highlighting the fashion industry’s reliance on fossil fuels) – starting with the way it’s produced to how it’s disposed of, the plastic and fashion industry have a very similar supply chain (the only difference is that plastics aren’t kept and resold in the same way as clothing through a secondhand market).

From plastics to clothing, we’ve become accustomed to disposing of things without much consideration. Hyper-consumerism and the mass production of low quality unsustainable goods influenced this waste culture. It’s led by various industries such as the fashion industry which is at the forefront of impulsive shopping behaviours and over-consumption. We’ve normalized this carefree mentality where we don’t truly recognize the labour process and appreciate the craftsmanship of the things we buy. We’re unaware or we avoid confronting the dark reality of where, but also who the makers are throughout the supply chains, how it’s produced and what happens after we get rid of it. 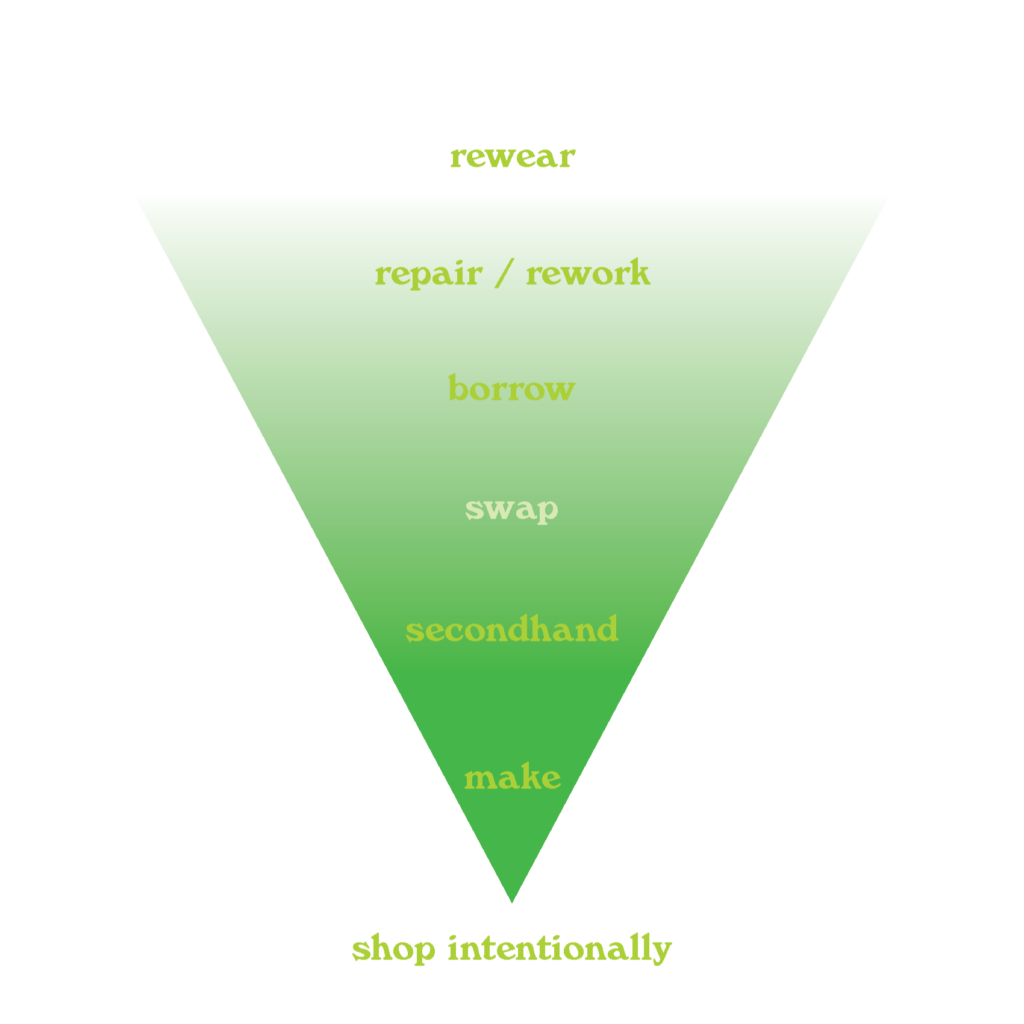 Buying clothing has become a compulsive habit and an addiction where we’re worshipping at this altar of stuff, almost as a kind of ritual that competes with the things that actually matter more in life – we (sub)consciously serve capitalism as consumerists. The better alternative is to shift towards a “slow fashion” mindset because we need to seriously reduce our consumption. If we’re still excessively buying from “sustainable” brands/collections that aren’t decreasing their production, then we’re just supporting the exact same problematic system under the guise of sustainability. As perfectly said by Orosla de Castro, co-founder of Fashion Revolution – “The most sustainable garment is the one already in your wardrobe.”

But it’s more than just “wearing our old clothes,” it’s about creating a more genuine attachment to them. We need to “fall back in love” with our clothing so that we care more and value the materials that were used to create it, while considering the labour behind every garment – we should reflect on all the hands and people involved, but also all the lives affected by the poor working conditions in factories and pollution created from production (harming both people and the planet). By simply appreciating our clothes, we’ll be more conscious and have an intentional wardrobe. When there’s awareness combined with appreciation of clothing, it wouldn’t be treated as disposable and thrown out without any afterthought.

Another form of care and love is by extending the life of a garment, which in a way can be a revolutionary act in itself. When we give our time and effort to mending or reworking our clothes, it disrupts the linear system (take > make > waste) within the fashion industry which relies on our endless consumption. We send a message that we don’t need big fashion controlling the way we want to represent ourselves, while still creatively and authentically expressing ourselves. Personally, that’s what true punk fashion is to me because it’s not something you can buy (forget the band tee, all black and studs..etc) – it’s a mentality and lifestyle with not just a diy ethic, but also anti-corporatism/corporate greed and anti-consumerist ideologies. This is about encouraging imagination and inspiring a radical movement in fashion, starting with just the way we dress. 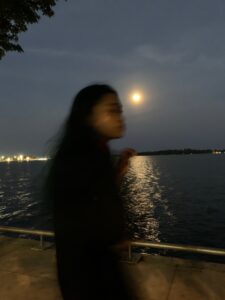 Norwin Anne is a Filipinx textile based artist / designer, (re)maker and eco-culture communicator. They studied Fashion Techniques and Design at George Brown College with a waste conscious approach and slow fashion mentality. Primarily working with secondhand materials, they started focusing on textile waste as a research study during school which evolved into learning more about the concept of waste in general to understand its environmental impacts and beyond. They want to continue developing their ideas and merge their knowledge of fashion with other subjects.

Recently, Norwin hosted From Here to Wear at St. Matthew’s Clubhouse. Read more about the event below and be sure keep an eye out for future events here!

About From Here to Wear.

“From Here to Wear is a safe accessible space where curious, like-minded people can repair, rework & swap clothing while also learning more about “textile waste”. This initiative aims to raise more awareness on the problems surrounding the management of textiles and to help prevent them from being disposed of improperly. The goal is to help manage unwanted clothing/textiles in the community and divert them from landfills.”